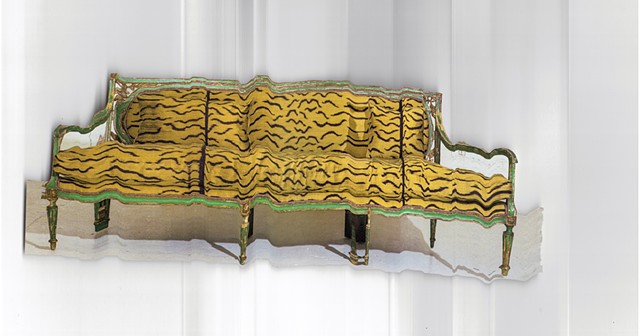 Using vinyl, paper, and paint, my collages, photographs and installations combine appropriated images and phrases from Instagram posts, advertisements from interior homeware resources as well as nature magazines - fusing them into surreal orchestrations that center along the themes of climate change, transformation, self-improvement and self-indulgence. I am examining the ways that images are used to stoke desire, not only for the objects themselves, but for the identities and lifestyles they represent.

The fantasy of reinvention has been an inextricable part of photographic and California's history. Westward Expansion was encouraged because of the images and promises of California and the lifestyle shifts it represented. Growing up in a suburb of LA country in California, I was surrounded by LA cultural obsession with affluence and flawless appearances. Coming from a middle-class background – we were never poor or rich – instead, we lived in the shadows between opulence and desolation. Our consumption habits followed suit, forever longing to be associated with the perceived perfection of wealth, class, and power. My work is a homage to the kind of living the middle class aspires to while being critical of its aspirational origins. I use images from California and my travels, appropriating Instagram posts from places I visit and images from CB2 catalogs, luxury homeware websites and magazines to directly engage with the language of conspicuous consumption. Making light of the language of capitalism and reinvention, I lift phrases from those same magazines used to describe luxurious objects to title and use in my work. Mimicking and marrying the slickness of magazine layouts with my own sense of humor, the work directly engages with the willful ignorance of consumption’s impact on the climate and transformative desire of the accumulation of riches. The work is always fighting and acknowledging its own illusion, forever using photography and language to describe and contradict itself.